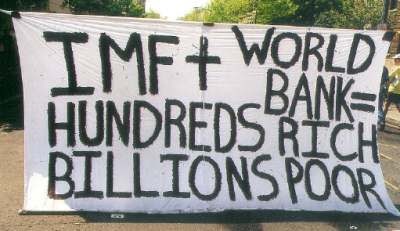 
The IMF has been passive in its approach and not been effective in promoting exchange stability and maintaining orderly exchange arrangements. This is considered as one of the major disadvantages of IMF. The original fund agreement permits fluctuations of exchange rate within limits. It can fluctuate within a range of one per cent above or one per cent below the official price. This is called adjustable peg system. The exchange rate of currency was fixed in terms of golden dollar. Over years, U.S gold stock declined and U.S balance of payments suffered. It led to the collapse of Bretton Wood System in August 1971 when U.S refused convertibility of dollars into currency. Member countries were also following diverse exchange policies. These events simply prove that IMF was not able to maintain a uniform international exchange system which is a big disadvantage.

12). Unsound policy for fixation of exchange rate by IMF


The unsound policy for fixation of exchange rate is one of the disadvantages of IMF. Some of the provisions of IMF are unsound. For example, devaluation is justified when international inflation causes fundamental disequilibrium. If inflation persists, devaluation of currency cannot be effective. Appropriate adjustments are desired only through internal economic policy changes. Further, member countries have changed the par value of currencies with impunity. In 1949, about 23 countries devalued their currencies in total disregard to the IMF rule. The IMF could not contain the situation and remained ineffective.


One of the important objectives of the IMF has been to remove foreign exchange restrictions which retard the growth of global trade. Still, member countries follow unhealthy practices of exchange controls and multiple exchange rates. Consequently, the international business is adversely affected.


The resources at the disposal of the IMF are not adequate to cater to the needs of member countries which is a setback of IMF. Uncertain capital inflows into the international financial system necessitates the strengthening of the fund resources. The resources of the fund may be enhanced by raising the quota. But developed countries are reluctant to increase the quota of the fund.


High interest rates charged on its advances are considered one of the major disadvantages of IMF. So, the debt servicing for the less developed countries is difficult. For example, since 1982 the interest charged for loans out of the ordinary resources of the fund is 6.6 per cent. The interest rates payable on the loans made out of borrowed funds is as high as 14.56 per cent. So, developing countries experience a lot of difficulties in redeeming their loans borrowed from the IMF.

16). Stringent conditions by IMF is one of its disadvantages

The conditional clauses imposed by IMF after 1995 are pretty stiff which are big disadvantages of IMF. To state a few:

One of the disadvantages of IMF is that it has failed to play an effective role in international monetary matters. For example, it does not provide facilities for short term credit arrangements. This has lead to the swap arrangements among the central banks of the Group 10 (Group of 10 leading industrialized countries). This arrangement provides for the exchange of each others currency and also short term credit to correct temporary equilibrium in balance of payments. The swap facility paved way to the growth of Euro-currency market. This has undermined the role of IM as a central monetary institution.

18). Failure to tackle East Asian currency crisis is one of the disadvantages of IMF


The failure to tackle East Asian currency crisis is considered one of the disadvantages of IMF. In July 1997, the occurrence of the East Asian currency crisis affected East Asian countries like Thailand, Malaysia, Philippines, South Korea, Singapore, Hong Kong and Indonesia. Depreciation of their currencies led to fall in the prices in the stock markets. The functioning of the financial institutions and flow of foreign capital were badly affected. In this context, the IMF advocated the East Asian countries to adopt high interest rates and cut public expenditure. But this advice proved to be faulty. As a result, in 1998 the whole East Asian region witnessed widespread recession, unemployment and low growth rates. The IMF was expected to follow a debt rescheduling plan. But this scheme was not introduced at the insistence of the United States and other advanced countries. Milton Friedman blamed the IMF for global crisis.

19). Domination by rich countries is one of the disadvantages of IMF

As reported in The Hindu (May 2, 2007), Venezuela’s president Hugo Chavez announced his country’s decision to leave IMF and the World Bank. He accused them of exploiting small countries. He branded the IMF and the Wold Bank as “mechanisms of American imperialism“. Moreover, the OPEC nation’s leader Mr. Chavez said: “we are going to withdraw…. and let them pay back what they took from us”. He issued an order to his Finance Minister to begin proceedings to withdraw Venezuela from both IMF and World Bank.