Showing posts from February, 2015
Show all

Jesus Christ was a black man-  according to the bible Before I begin, let me say this article is not about religion, but about history. I am not a religious person, I am not interested in religion. It's high time black people got to begin un-learning lot of the information packed into our minds courtesy of long years of slavery and colonialism. It is time for the black race to rise and claim what is ours. History has been distorted extensively to downplay the contributions of black people to humanity.  One glaring distortion is about the character called Jesus Christ in the bible, whom the ancient artists drew as a black man, ancient sculptors carved him as a black man, and even the bible itself described him as a black man in many passages. Before I go further, let me inform you that if you're a serious seeker and you're interested in digging deeper for the whole truth and nothing but the truth, no matter where it may lead to, then you'll need to first find out What
10 comments
Read more

Kwame Nkrumah, The CIA & The Coup, and the Destruction of Ghana

Kwame Nkrumah, the CIA and the Destruction of Ghana by The Alkebulan Exodus Project in Black History Revealed.  Our Roots, Pan African Movement Previous Kwame Nkrumah (21 September 1909 – 27 April 1972) was the first President of the first free nation in Africa, and a founding father of the Pan-Africanist movement. His dream was to turn Ghana into a modern industrial utopia – a society shaped by the power of science that would serve as a model for the rest of the African continent. At the heart of his plan was the Volta Dam, a hydroelectric power plant that would provide Ghana with all the cheap power that it would need to initiate an industrial revolution. Rise to Power In 1935 Kwame Nkruma left Ghana for the United States as a student, receiving a BA from Lincoln University, Pennsylvania in 1939. During that time, he was elected president of the African Students Organization of America and Canada. He was also exposed to the philosophy and teachings of Ma
Post a Comment
Read more 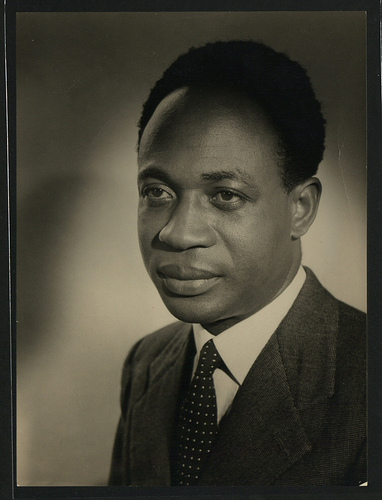 KWAME NKRUMAH: THE FATHER OF AFRICAN NATIONALISM AND THE FIRST PRESIDENT OF GHANA Celebrating our African historical personalities, discoveries, achievements and eras as proud people with rich culture, traditions and enlightenment spanning many years Osagyefo Dr Kwame Nkrumah (21 September 1909 – 27 April 1972), P.C., was the leader of Ghana and its predecessor state, the Gold Coast, from 1951 to 1966. Overseeing the nation's independence from British colonial rule in 1957, Nkrumah was the first President of Ghana and the first Prime Minister of Ghana. An influential 20th-century advocate of Pan-Africanism, he was a founding member of the Organization of African Unity and was the winner of the Lenin Peace Prize in 1963.                                 Portrait of Kwame Nkrumah,Ghana`s first President Nkrumah was born into the Nzima ethnic group who resided in the southwestern part of the Gold Coast and his parent were   Elizabeth Nyanibah of the An
Post a Comment
Read more
More posts