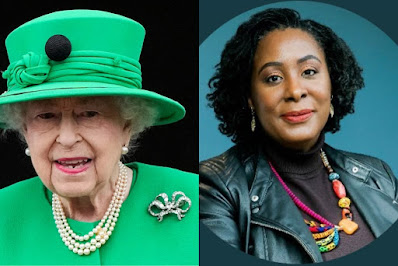 When the news broke that the queen of England was ill, Ms. Uju Anya, a lovely anti-racist African living in the USA, responded to the news via Twitter, saying: “I heard the chief monarch of a thieving raping genocidal empire is finally dying. May her pain be excruciating.”

That's indeed a perfect wish if we must deal with Britain the same way they dealt with our ancestors.

In 1891, in Kenya, the British buried an African king alive! His name was king Waiyaki Wa Hinga.

King Waiyaki had earlier made an agreement with the British to allow them to settle peacefully in his land. As usual, the British reneged from the agreement a few months later and wanted everything in his kingdom including his seat. A fight ensued and they hit king Waiyaki with (simi) dagger on his head and planned to take him to court for prosecution. On the way to the court, they changed their mind and decided to bury him alive instead. Till today, nobody knows where they buried him.

In 1835, in South Africa, the British captured and beheaded an African king. His name was king Hintsa, and he was of the Xhosa tribe.

The queen of England asked that his skull be brought to her palace in London, and it was done. Till today, nobody knows where they buried him or where his skull is.

The list of dethroned, killed and exiled African kings is endless.

So, what else do you expect the descendants of king Waiyaki and king Hintsa to wish the British queen? Why should we not have anything but disdain for the queen of England? Sorry, we can't help it but be disdainful for the British queen. And as Ms. Uju beautifully put it "if anyone expects me to express anything but disdain for the monarch who supervised a government that sponsored the genocide that massacred and displaced half my family and the consequences of which those alive today are still trying to overcome, you can keep wishing upon a star".

That's why Ms. Uju Anya's view was supported by people in India, Ireland, Australia, Asia, South Africa, and many other parts of the world. Because those are the victims of British crimes around the world and they do feel the same way as Ms. Uju Anya. In Ireland (a major victim of British crimes) cafeterias served beer FREE overnight to celebrate the death of an evil woman.

Are you one of those asking; why would someone send such a mean tweet about queen Elizabeth?

You need to understand that they're not celebrating because they hate the queen per se but because Britain committed so many crimes around the world. Britain tortured, hanged, starved, caged, beheaded, buried alive, and stole from people around the world and queen Elizabeth inherited everything. For more information, see European crimes in Africa: European crimes caught on camera during colonization of Africa. Not only did queen Elizabeth inherit everything looted by Britain from others overseas, but most of the crimes happened under her watch, in fact, by her order.

Surprisingly, she managed to fool the whole world by appearing to be gentle and humane but inside she's something else.

These crimes and  the wealth generated from them is the only reason Britain is a wealthy nation today. But that's by the way.

I am not going to write an epistle today, rather I'll just show you list of books you need to read to understand the scale of crimes that the British empire committed around the world. If you read the books that I am about to list, you'll understand why an Uju Anya would send such a tweet and why people are celebrating in Ireland, Africa, and India.

Without much ado, here are the books that Britain and the British monarchy wish that you don't read.:-

Note: If you need more information about any book, just right click and open it to read the description and the reviews by people who've already read it.

1). Inglorious empire: what the British did to India- by Shashi Tharoor

2). Late Victorian Holocausts: El Niño Famines and the Making of the Third World - by Mike Davis

3). Histories of the Hanged: The Dirty War in Kenya and the End of Empire- David Anderson

4). Legacy of Violence: A History of the British Empire- by Caroline Elkins

5). Britain's Gulag: The Brutal End of Empire in Kenya- by Caroline Elkins

6). Imperial Reckoning: The Untold Story of Britain's Gulag in Kenya- by Caroline Elkins

8). The Biafra Story: The Making of an African Legend- by Frederick Forsyth

9). The West and the Rest of US: White Predators Black Slavers and the African Elite- by Chinweizu

10). An Era of Darkness: The British Empire in India- by Shashi Tharoor

11). The Anarchy: The Relentless Rise of the East India Company- by William Dalrymple

12). Empire of Crime: Organized Crime in the British Empire- by Tim Newark

14). Blood and Bronze: The British Empire and the Sack of Benin- by Paddy Docherty

In the meantime, find more books below that European imperialists in general don't want you to read.

King Leopold's Ghost: A Story of Greed, Terror, and Heroism in Colonial Africa- by Adam Hochschild

The Wretched of the Earth- Frantz Fanon

Intellectual slavery, the worst legacy of colonialism - by Africason

You may ask: is Britain the only country that participated in slavery or colonialism? Why not talk about other European countries?

The answer is that Britain majorly (France to some extent) is the only country in the world that are yet to acknowledge their crime. In fact, they insist that what they did around the world was the right thing to do, whereas, a country like Germany has apologized for their wrongs and even paid some reparations to some nations. However, forget about the reparations though, because it's just symbolic. But at least you see a genuine effort to right the wrong. Britain till this day still pride themselves as having ruled 75% of the world. So, since they did the majority of the crime, they must take the majority of the blame. As the saying goes "if you do the crime, you do the time". Reap what you sow.

Africason
Africason is a die-hard believer in Africa.
Twitter: @African_School
Facebook.com/AfricanSchool
Related articles:
European crimes in Africa: European crimes caught on camera during colonization of Africa
It's time to abolish the commonwealth of nations
Top 10 Africans & African-American scholars of black history you should know
Support me
I am raising money to build a model school that would produce students who will outperform those from our current system of education in Africa, in science and scientific thought. I bet you that I'll change education in Africa if I have the resources. Donate here