The difference between reality and truth

The difference between reality and truth

Its very important at this point in your life to understand the difference between REALITY and TRUTH because they're not the same thing.

Another example I can give you about reality is to use something like God.

What is God? God is God. Nothing more, nothing less. God is reality.

Everything else we do as humans is that we try to interpret or explain that reality. And when we have interpreted the reality, we call it the truth. But the truths are just words created by ourselves in desperation to explain the reality.

When you're eating food it's reality. The taste of the food doesn't have to be explained to you by someone else, neither can you be able to explain it. Because it's reality.

When you're having sex it's reality. The feeling doesn't have to be explained to you by someone else, neither can you be able to explain the feeling. Because it's reality.

But if I ask you: how does the food taste? Or how was the sex?

But remember those words you're using to explain it to me are not the same as the experience or feeling you had.

Therefore, you'll end up setting a precedent in my mind about how it feels like. And what would happen is that whenever I should think about the experience you had (which is the reality) I'll instead defer to what you told me (your words). So, you'll control my perception about the taste of the food and sex, since I didn't participate in having the sex or eating that food. The worst thing is that if you're not being honest about it and you wanted to fool me, you'll fool me completely because there's no way for me to know beyond your words. Whoever gives you a language (words) or education (knowledge) or God (religion) will control you. The precedent, meaning, and context set in your mind about something won't allow you to participate in the reality.

God is good. God never said so. Man did.

God is love. God never said so. Man did.

Satan is evil. Satan never said so. Man did

Satan is bad. Satan never said so. Man did.

However, the polarity which we acknowledge as God or Satan, good or bad is the reality that we desperately try to explain to no avail. Yet, it's subjective, because something good to you may be bad to me. It's we humans that set the context for good or bad. For details, see what is Satan? What is Lucifer? The biggest secret in the world.

God is reality. Satan is reality. They're not something to be worshipped or to be believed, rather they're something that you need to understand yourself and become that part you acknowledge as good. But you can't help it but become bad sometimes when necessary. No one can help you understand this but yourself. Because only you can experience reality yourself. Anything else anyone tells you about reality/God/Satan, whether in the bible or Koran or in any other so called holy book is second-hand interpretation of God or Satan, but not the reality. Because the reality has no words, except words assigned to them by we humans. That's why it's said that you create your reality.

Truth is CONDITIONED reality. Truth is based on our perception of what we believe to be the reality. Truth is contingent on our preconception i.e truth is based on the level of awareness we have about what we believe to be the reality. Example; if someone else is sitting just as you are but he/she is looking at a blank laptop computer screen. You can conclude from a distance that he/she is reading something. That would be your truth until you actually get close only to REALize that the person is not reading at all because the computer doesn't even have a battery, and therefore not working. In other words, truth is your opinion. We can have different ways of explaining something depending on our point of view. This is a bit tricky to explain, so I'll show you images below. 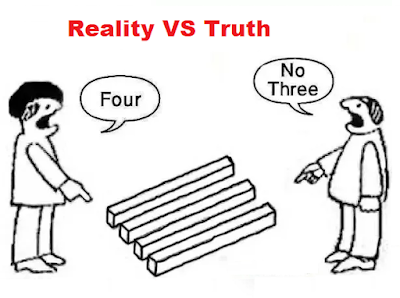 However, the reality is that the image is an optical illusion to explain what I am saying. The drawing is both four and three but yet neither four nor three. Its just an optical illusion to let you know that the truth depends on your perception, which in extension means your point of view. The image is not even wood. Its just an image on computer. In fact, its not even an image, its a computer code. The codes are in 0's and 1's. The codes themselves are made of something else but let's just stop here. That's the reality. 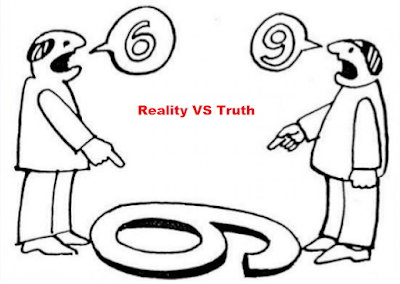 Therefore, truth is subjective!. Truth is the conclusion we arrive at based on our best perception of reality. Truth is just a LABEL that we nickname reality for the sake of convenience. That's the reason you may find something weird in one culture and it would be completely fine by the people of that culture no matter how weird. Of course, they too may find something weird about your own culture but you'll never see anything wrong with that. Its also true in our individual lives.

Again, whoever defines, whoever sets the precedent, whoever sets the context for reality gives you your truth. And whatever you believe to be the truth is hardwired in the brain in such a way that you'll be prejudiced against the reality, therefore, you'll be stuck to such an extent that you won't be able to go to the backend (reality) to create your own truth for yourself. That's why its very dangerous for an external culture to give you a GOD, LANGUAGE, EDUCATION because all three are precedent setters. If you believe in a God, you can't challenge it. If you speak a language, you can't challenge the meanings you get when you speak. If you learn something in school, you can't challenge it.

Always look for the reality about something, not the truth. Don't be satisfied with the truth, it is society that has conditioned you to accept that truth. Go further and find out the reality behind that truth.