Here is why black people haven't got reparation yet

When is the pay day? 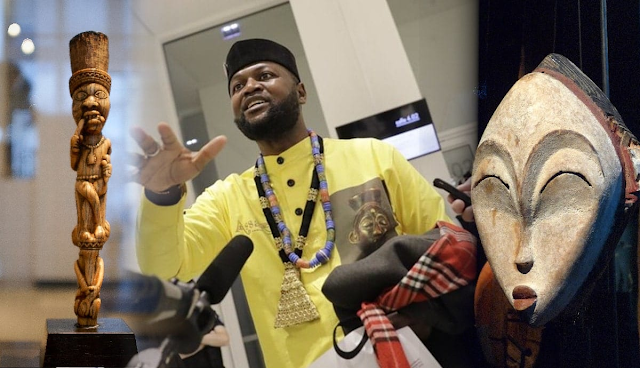 How is it that Britain paid £20 million pounds (£300 Billion in today’s money) as compensation to former slave owners but nothing was paid to the black slaves themselves?

Who deserve to be compensated between a thief and victim of theft?

How is it that Britain rewarded thieves who enslaved and robbed our African ancestors but left us the victims with nothing?

What’s worse? The descendants of slaves living in Britain paid tax to fund the compensation to their former oppressors till 2015! And nobody raised an eyebrow among black people. Not even in London.

Everyone else has gotten a reparation. The Jews got a reparation and still getting reparation for the crimes committed against them by Nazi Germany. Last year, news headlines reported that ''Germany to give $662 million in aid to Holocaust survivors.'' The sub-heading  read ''Germany has agreed to provide more than a half billion euros to aid holocaust survivors struggling under the burdens of the coronavirus pandemic, the organization that negotiates compensation with the German government said Wednesday.''

The Jews even have an ''organization that negotiates compensation'' for their people. After the holocausts (which is child's play to black holocaust in Africa, USA, Jamaica, Haiti, etc) the Jewish people rallied among themselves and set up an organization called the ''Conference on Jewish Material Claims Against Germany'' which is an organized body to seek reparation against Germany. The Jews argue that ''with the end of World War II now 75 years in the past, the holocaust survivors are all elderly, and because many were deprived of proper nutrition when they were young today they suffer from numerous medical issues. In addition, many live isolated lives having lost their entire families and also have psychological issues because of their persecution under the Nazis.''

Talking about psychological issues, that's why a Congolese activists, brother Emery Mwazulu Diyabanza, out of depression for the injustice done to black people, went to a museum in Paris France last year to dislodge stolen African artifacts from a French museum. But do you know what happened to him? Instead of getting a closure from the French authorities but he was instead fined for €2,000, which he paid from his personal savings. But no black community or individual raised an eyebrow in Europe or in any place.

It begs the question; if Jews who themselves were slave traders in America could establish such reparation claim against Germany; what are we black people waiting for?!! Slavery caused disintegration of family ties between Africans and their brothers and sisters now in the Caribbean, USA, Europe, and all over the world. And we suffered more psychological harm, economic loss, spiritual disorientation, cultural loss far more than any Jew.

What are we waiting for?!!

Are we still so mentally enslaved that we've decided to leave the white man off the hook?

The answer to that question would tell you why the Jews got reparation while brother Emery Mwazulu Diyabanza got reprimanded instead with a fine of €2,000 by France.

You, myself, and all Africans; whether in the West Indies, Africa, Caribbean, North America, South America, Australia are descendants of victims of slavery and colonialism. Therefore, we did lose our family ties and we do also have psychological issues as a result of the persecutions of our ancestors under Europeans for 450 years. Without our unfortunate encounter with Europeans, you reading this in West Indies, Africa, Caribbean, North America, South America, would've been reading this somewhere else. You would've married someone else, your name would've been something else, I, you would've been speaking an African language, you would've been eating an African meal, you could have been a king in an African town. Everything, I mean, everything would have been completely different for each and everyone of us. But today, everything about us; including the very language and nationality we have today were created by Europeans, thereby causing us identity and severe psychological crises that remain with us till this day.

Therefore, if anybody has right to lay claim to reparation for wrongs committed in the past, it should be black people. That's why brother Emery Mwazulu Diyabanza have been going around Europe, campaigning, trying to make Europeans aware that the stolen artifacts in European museums must be returned to Africa where it rightfully belong. But instead of the black man getting a reparation, he instead was called a thief and got fined €2,000 by a French court for touching an artifact that rightfully belong to Africans.

Why is it that YOU a black man, a black woman who worked for white people for 450 years without payment doesn’t want reparation paid you? The answer is that your ancient black spirit is dead! The white man destroyed you both physically and spiritually. For details on how the white man laid the foundation to destroy black people even before slavery, see what is Satan? What is Lucifer?- the biggest secret in the world.

Do you know why the Jews got reparation while the black man in France got a €2,000 fine instead? Because white people are aware we're disjointed, we're divided, we don't network. Therefore, we're weak.

The Jews got a reparation because they re-grouped after their ordeal, while on the other hand, black people dispersed after our ordeal. The Jews didn't begin seeing themselves as American Jews or European Jews or Russian Jews or Asian Jews. They continued to see themselves simply as one Jewish people no matter their location in the world.

Is there any other crime on this earth that’s more adverse than the 450 years of kidnapping of black people by Britain and France?

Tell me; why don’t YOU want a reparation?

Guess what? Our kindness which has long been mistaken by white people as docility is the reason. They’ve studied us for ages and they know that our goodness is also our weakness. But until we wake up and shake the tables, informing white people that they owe us a debt, we’ll never be taken seriously by them. That’s the reason the Queen would plot the assassination of her daughter in-law because she has black gene. Poor Meghan. Thankfully, she learned about the plot and ran away to the USA for her dear life.

Our docility has grave wider consequences.

That’s why Jacob Zuma is in jail in South Africa, while British and other European descendants who enslaved and robbed black South Africans since 500 years ago are walking free, while the black man who mismanaged few pennies in same country is in jail.  But the Gold and minerals belonging to white people have been taken over by white people in South Africa and there's no white man in jail or has ever been jailed for theft.

That’s why Charles Taylor is in jail in Europe for war crimes, while George Bush and Tony Blair who committed much more war crimes in Iraq and Afghanistan are walking free today.

That's why France fined the Congolese €2,000 for dislodging African artifacts from a Paris museum in France. It is the same as the tax paid by black people in Britain in order to compensate former slave owners. Wow!!

We’ll never get respected until we deal with white people exactly as they’ve dealt with us.

The descendants of slaves in Britain should wake up and at least ask for tax refund of monies they paid as tax between 1835 to 2015 which was used to pay off loan taken by the British government to reward former slave owners. You deserve a tax refund! You shouldn't even pay tax in Britain! Your ancestors already paid for your whole living expenses!

Brothers and sisters, let's wake up!