For countries in the tropics colonized by Britain, France, Spain, Portugal

The book for REAL Freedom 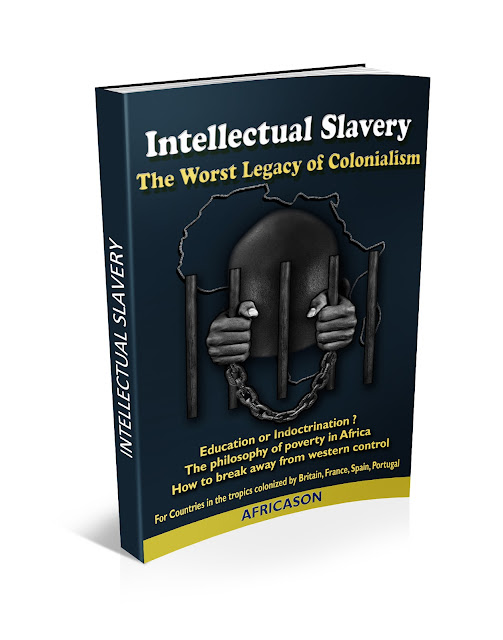 Do you want to know the real reason Africa is poor and backward? This e-book is the philosophy and metaphysics of poverty in Africa. Download it for FREE. It concerns all the countries in the tropics that were colonized by Britain, France, Spain, Portugal.

Africa will suddenly wake up and rule the world, any day we decode the message in this book, otherwise, get ready to be re-enslaved.

There are 3 of such books that people should have written in Africa and in all the colonized countries in the tropics, but I have looked around and since nobody want to write about it, I decided to write one. This first one is called intellectual slavery, the worst legacy of colonialism. The remaining two books dealing with other ways we are still being controlled and why history was distorted, I'll write later.

The colonized nations in the tropics must realize the education we have is not originally ours, rather, it is one of such things imposed on our ancestors after our institutions were destroyed during colonialism, and it stuck with us ever since. Today, it seems natural. But, to accept it as natural means that we have eternally accepted our fate as slaves to knowledge, and indeed to worship the white man forever. This book will help you understand the true meaning of education, and also why we are poor. It will help you understand why European colonialists gave the wrong type of education to their colonies before independence, and also how the education is a tool for further external control. To be truly human with intellectual capability, would mean our changing what was imposed on our ancestors and charting our own course, different from what Europeans wanted us to be.

There's nothing much to say here anymore, cause everything anybody needs to know about the nature of the education we have and how it would lead us back to slavery is all in this book.

I have thought about it and come to the conclusion that I rather give out the book for free to all Africans to read than to make money. ''While others may have freed the body, none but ourselves can free the mind''............ Marcus Garvey.

If you are an African who want to truly free your mind, and to understand our predicament in Africa, read this book. Its free!. Download the e-book free in PDF at either of the sites below.

WARNING: This book will make you sad, but it will set you free. Can you handle the truth?

Some of the things said in this book has never been said before, so I was caught us with inventing expressions and even words just to be able to explain certain things. Please take note of the below before reading.

Philosophy mismatch:
The contradictory or logical disharmony you get when using western ideals, values, philosophy, beliefs, etc., to question African ideals, values, philosophy, beliefs, etc.. vice-versa. This is the first stage of our problems in Africa, created by our unfortunate contact with Europeans. If you press the CTRL and ALT button and the DOWN ARROW button on your windows laptop or computer, you will literally have a philosophy mismatch when you try using the computer.

Post Traumatic Western Education Syndrome:
PTWES is caused by prolonged philosophy mismatch, and it is a condition that any well educated African suffers for the rest of his/her life upon acquiring western education.

Putting Square Pegs in Round Holes Syndrome:
PSPIRHS is the condition of often arriving at the wrong decision on how to solve a problem. The proffered solution often ends up as a misfit.

Asaa principle:
The asaa principle of African consciousness is the use of the duality that exists in nature to give a panoramic answer to a question. It states that every question has two-in-one answer, just like the opposite side of a coin makes one coin. You must see both sides of the coin to fully understand how the coin looks like.

Euro-Afro hybrid:
An educated black man who is neither a white man nor a black man in thinking.

Psycho-cultural control:
The mind control mechanism unleashed by the colonial masters on all their former colonies after so-called independence.

Learned helplessness:
A conditioned state of mind whereby a person or society has given up trying to find a solution to a problem because they have tried many times and failed, and have come to believe that such problem cannot be solved. Therefore, the person or society becomes helpless, instead of thinking out of the box to solve the problem or continue to find solution to the problem.

Operating system (OS):
Software of the mind. Education and or language.

Download the ebook FREE in PDF at either of the sites below.


The paperback and kindle version is on amazon. If anybody is able to download it on amazon or purchase paperback, I'll appreciate you let me know whether the pages fit well on the paper and or your device. I don't have a kindle device to check it, but I've checked with a kindle App on my Android phone and its ok.