Education in Africa is Still Colonialism and Has Always Been

Education in Africa is Still Colonialism and Has Always Been 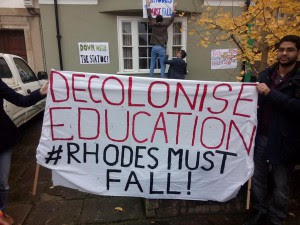 The movement to decolonise higher education — a coalition of students, progressive academics, university staff and concerned public — must find ways to hold the institutions accountable and maintain a nonviolent and intellectual struggle until Eurocentrism and epistemic violence at universities are dismantled.

Calls for decolonisation of universities have been long overdue. The movement to decolonise higher education was launched into the public sphere by students in 2015 and has been maintained by them and a small number of progressive academics ever since.

The fact that the students had to kick-start the campaign for decolonisation of the curriculum rooted in colonialism and apartheid — and not the university leaders, academics and administrators — tells a lot about the state of higher education in post-apartheid South Africa and the continued maintenance of the hegemonic status quo in the knowledge, teaching, learning and research at universities.

Historical, intellectual and cultural contributions of Africa and other parts of the “non-Western” world were subjugated.

Historically white universities either gave full support to the colonial and apartheid systems or enjoyed their liberal white privilege and benefits while the majority was subjugated and exploited.

Historically black universities were established and maintained to train black people to serve the colony and later the apartheid state.

Governance systems, academic agendas and the curriculum were imposed by the government and driven mainly by white academics and administrators.

One would think that things would change after 1994. But according to the 2008 Report of the Ministerial Committee on Transformation and Social Cohesion and the Elimination of Discrimination in Public Higher Education Institutions, universities have done very little since the demise of apartheid to open up “to different bodies and traditions of knowledge and knowledge-making in new and exploratory ways”.

Years later, the curriculum remains rooted in oppressive know-ledge systems and disconnected from African realities, including the lived experiences of the majority of black people.

What we have in most fields of study is Eurocentric indoctrination that marginalises Africa and is often full of patronising views and stereotypes about the continent.

Unashamedly, universities still follow the hegemonic “Eurocentric epistemic canon” that “attributes truth only to the Western way of knowledge production”. When Africa appears in the curriculum, it’s not more than a “version of Bantu education … students are being taught a curriculum which presumes that Africa begins at the Limpopo, and that this Africa has no intelligentsia worth reading”. These are academic and political commentator Mahmood Mamdani’s words written in 1998. Not much has changed since then.

Epistemic violence persists in post-apartheid South Africa where the higher education system has obliterated most linkages that black students may have with the prescribed texts, propagated narratives, debates and learning on the one side and their history, lived experiences and dreams on the other.

In the old colonial fashion, they are the “other” in their country of birth, not recognised and valued unless they conform. Through education, they are expected to learn to “speak well”, gain skills and Eurocentric knowledge that will allow them to enter the marketplace but not allow them to make fundamental changes to the status quo in the society and the economy.

Decolonisation aims to engage with the diverse experiences and perspectives in every culture and part of the world instead of blindly following the Western “universalism” and the notion that Europe and the West are the source of all knowledge.

The curriculum must be free from the Western epistemological domination, Eurocentrism, epistemic violence and worldviews that were designed to degrade, exploit and subjugate people in Africa and other parts of the formerly colonised world.

Former University of the Free State vice-chancellor Jonathan Jansen’s words from 1998 still ring true: “Content matters, and it matters a great deal when a European-centred curriculum continues to dominate and define what counts as worthwhile knowledge and legitimate authority in South African texts and teaching; it matters very much in the context of the inherited curriculum, informed by apartheid and colonialism, in which only the more readily observable, offensive racism has been skimmed off the top.”

Lesley le Grange of Stellenbosch University notes that decolonisation is about decentring the Western knowledge systems and ensuring that they “become one way of knowing rather than the way of knowing”.

A decolonised curriculum must place South Africa and Africa in the centre of teaching, learning and research and incorporate the epistemic perspectives, knowledge and thinking from the African continent and the Global South and place them on an equal footing with the currently hegemonic Eurocentric canon.

Through decolonised curriculum, we must address the past and current structural domination and oppression in South Africa, Africa and the world — and develop the skills needed to overcome these in the future.

As former president Kgalema Motlanthe points out, we need to “reconstruct the African story based on its past, in a manner that does not seek to engage in a feel-good, nationalist historiography but challenges the prevailing climate of falsehoods, distortions and outright lies about our continent generally and black Africans in particular”.

Where to find academics and administrators capable of addressing deep-rooted epistemic violence and injustices at universities? Notwithstanding the newfound commitment to decolonisation of education frequently proclaimed by South African universities, many in the academia don’t even understand what decolonisation entails.

When it comes to knowledge about Africa, most of South Africa’s white academics are intellectually and academically completely out of touch. They have very little to contribute to the decolonisation project because they still believe that the Western knowledge systems constitute the only basis for higher forms of thinking.

Although the epistemological transformation and decolonisation depend on significant transformation in academia, this does not necessarily guarantee fundamental change. The leadership change at many universities — from white to black, Indian or coloured vice-chancellors, their deputies or deans — hasn’t so far led to significant changes when it comes to dismantling Eurocentrism and epistemic violence.

What South Africa needs are academics and administrators with a decolonial stance. The challenge is that they are a minority at universities. Many in academia come from the old system that worked hard to maintain apartheid and white domination; some have enjoyed white privilege while claiming to be against apartheid or, in the case of many black academics and administrators, were indoctrinated during apartheid.

Higher education will not be decolonised overnight, as the students are demanding. This will be a long and arduous struggle, possibly requiring new generations of academics and administrators — who were not part of the old oppressive system and who are representative of the country’s demographics — to reach senior positions at universities.

Not all is lost, however. Even though the opposition to change is entrenched in university structures and will not easily allow the breaking down of power, influence and decision-making, the struggle to decolonise universities must go on.

The debates about decolonisation make many at universities uncomfortable. This is necessary because change will not happen if people are comfortable with the status quo.

Social and structural change seldom happens without activism, advocacy, dissent, disruption and protest. The powerful and influential don’t give in because it is the right thing to do; they only act when they are compelled to do so by social movements and masses.

Progressive academics and lecturers must take the lead and not wait until the institutional cultures and environments transform. They need to decolonise their own curriculum and democratise the learning space in which they operate.

Writer Sisonke Msimang says that “radical departures from the status quo are never easy. They are always simultaneously symbolic and visceral. But they open up new possibilities for questioning what was once unquestioned and unquestionable.”

This is exactly what the higher education system needs today.
Source: The journal
Africason
Africason is a die-hard believer in Africa.
Twitter: @African_School
Facebook: facebook.com/AfricanSchool