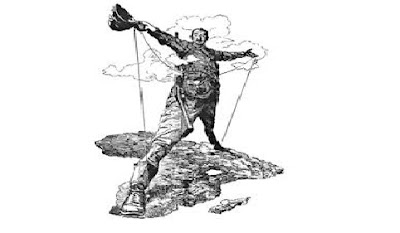 "The Berlin Conference was Africa's undoing in more ways than one. The colonial powers superimposed their domains on the African continent. By the time independence returned to Africa in 1950, the realm had acquired a legacy of political fragmentation that could neither be eliminated nor made to operate satisfactorily."  (H.J. de Blij and Peter O. Muller, Geography: Realms, Regions, and Concepts (1997) p. 340).

In 1884 at the request of Portugal, German chancellor Otto von Bismark called together the major western powers of the world to negotiate questions and end confusion over the control of Africa. Bismark appreciated the opportunity to expand Germany's sphere of influence over Africa and desired to force Germany's rivals to struggle with one another for territory.

At the time of the conference, 80% of Africa remained under traditional and local control. What ultimately resulted was a hodgepodge of geometric boundaries that divided Africa into fifty irregular countries. This new map of the continent was superimposed over the one thousand indigenous cultures and regions of Africa. The new countries lacked rhyme or reason and divided coherent groups of people and merged together disparate groups who really did not get along.

Fourteen countries were represented by a plethora of ambassadors when the conference opened in Berlin on November 15, 1884. The countries represented at the time included Austria-Hungary, Belgium, Denmark, France, Germany, Great Britain, Italy, the Netherlands, Portugal, Russia, Spain, Sweden-Norway (unified from 1814-1905), Turkey, and the United States of America. Of these fourteen nations, France, Germany, Great Britain, and Portugal were the major players in the conference, controlling most of colonial Africa at the time.

The initial task of the conference was to agree that the Congo River and Niger River mouths and basins would be considered neutral and open to trade. Despite its neutrality, part of the Congo Basin became a personal kingdom for Belgium's King Leopold II and under his rule, over half of the region's population died.

At the time of the conference, only the coastal areas of Africa were colonized by the European powers. At the Berlin Conference the European colonial powers scrambled to gain control over the interior of the continent. The conference lasted until February 26, 1885 - a three month period where colonial powers haggled over geometric boundaries in the interior of the continent, disregarding the cultural and linguistic boundaries already established by the indigenous African population.

Following the conference, the give and take continued. By 1914, the conference participants had fully divided Africa among themselves into fifty countries.

France took much of western Africa, from Mauritania to Chad (French West Africa) and Gabon and the Republic of Congo (French Equatorial Africa).

Portugal took Mozambique in the east and Angola in the west.

Italy's holdings were Somalia (Italian Somaliland) and a portion of Ethiopia.