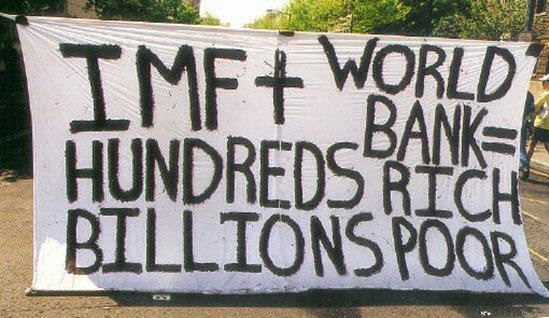 The International Monetary Fund (IMF) and World Bank, both controlled by the same people, are one of Africa’s biggest problems. This two financial institutions are well-known for imposing conditions that cripples the African continent, slows development, and keep Africa in poverty.

For this reason, former Libyan leader, Muammar Gaddafi pledged to fund three ambitious African projects — the creation of an African investment bank (in Libya), an African monetary fund (in Cameroon) and an African central bank (in Nigeria).

Africa felt that these Africa-centered institutions were necessary to end its dependence on the IMF and the World Bank — institutions that prescribe unrealistic and unpopular measures to qualify for loans. These conditions as mentioned above, include measures to privatize natural resources and allowing unlimited access to foreign companies are designed to keep Africa eternally poor or dependent on the West.

Libya had pledged funds for these projects from its investments in the United States. The $30 billion USD which the Barack Obama administration froze (or robbed) at the first signs of the orchestrated troubles in the Libyan town of Benghazi was meant to finance these three African projects which would have given Africa some economic freedom.

An analysis by Jean-Paul Pougala from Cameroon states that the US $30 billion frozen by Mr. Obama belong to the Libyan Central Bank and had been earmarked as the Libyan contribution to three key projects which would add the finishing touches to the African  federation – the African Investment Bank in Syrte, Libya, the establishment in  2011 of the African Monetary Fund to be based in Yaounde with a US$42 billion  capital fund and the Abuja-based African Central Bank in Nigeria which when it  starts printing African money will ring the death knell for the CFA franc through which Paris has been able to maintain its hold on some African countries  for the last fifty years. It is easy to understand the French wrath against Gaddafi.

“That man has invested in Africa more than any other leader in the recent history of Africa’s coming into political independence,” says Minister Farrakhan in a speech citing the West’s desire for Gaddafi’s death.

Minister Farrakhan last year mentioned that “America needs access to the mineral resources in Africa to be a viable power in the 21st century. The fall of the dollar is a manifest loss of America’s prestige and influence among the nations of the earth and an indicator of her end.”

“One of the greatest powers of America was her dollar. The loss of such power will bring any nation to weakness, for this is the media of exchange between nations.”

When Gaddafi called on all Oil producing countries in Africa NOT to accept payment for oil in paper currencies any longer such as the US Dollars or Euros, but rather introduced Gold Dinar as the new medium of exchange. This initiative shook the Western economies that Obama and his allies had to move swiftly towards killing Gaddafi and take over it’s oil reserve, including pushing AFRICOM dominance of the continent.

Analysts say Gaddafi introducing the Gold Dinar as the new medium of exchange would destroy dependence on the U.S. dollar, the French franc and the British pound and threaten the Western world. It would “finally swing the global economic pendulum” that would break Western domination over Africa and other developing economies.

The lynching of Col. Gadhafi can be understood in the context of America and Europe fighting for their survival, which an independent Africa jeopardizes.

To conclude, IMF and World Bank have people like Barack Obama and other presidents including those of the African continent, helping to push policies and agenda that continues to keep Africa in poverty, hence making economic growth hard to achieve. Do a Google search for “IMF and World Bank in Africa” and you’ll find several information on how this two institutions have been stalling the growth of the African continent (mind you, some of the results Google displays are nothing but propaganda – by pass those), keeping the economy dependent on loans with huge interests, making sure Africa remains in poverty, just to name a few. All this are accomplished with the help of the leaders you, you, and you are continuously electing. Stop voting for this clowns – they do more harm than good.

There’s a saying that the people have forgotten how powerful they are.


This unbiased report is filed under: Africa Report