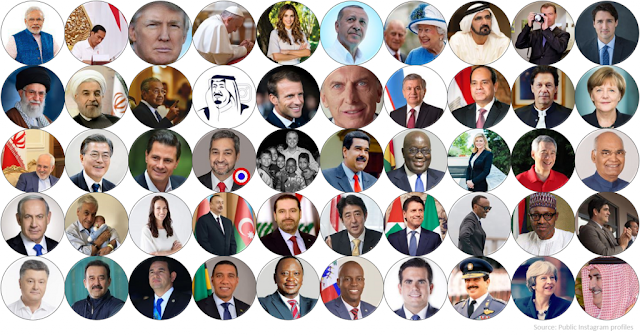 Fortunately, when it comes to leadership, your family background doesn't matter so much. Because experience has shown that anybody born in a particular country can become a Governor or Minister or even the head of state of that country without coming from a wealthy family background. It means that you too can become the president of your country one day.

Again, it has little or nothing to do with your family background because many people from poor family background have sometimes become leaders or president of their country. This is why I want to introduce you to books on leadership, which you need to read to learn how to become a good leader. It's time we prepare for a change in leadership with new generation of leaders.

The books that I am about to show you were recommended by such leaders themselves in various countries, when journalists asked them the books that motivated them to become leaders. In this list, former US president, Bill Clinton recommended eight books, Donald Trump recommended three books, Barack Obama recommended ten books, Vladimir Putin recommended four books. There are many other past and present leaders from around the world who recommended one or two books.

Find below the top books on leadership to read if you want to become a leader, minister, governor or president of your country. Some of the books intertwine with how to  lead large multinational organizations.

The books are not arranged in any particular order, so you may find the book you like on top or in the middle or at the bottom. Just right click any book to read the brief description and reviews from those who've already read it.

IMPORTANT: It doesn't matter what country in the world you come from, the following books are the greatest books on leadership and they're recommended for people from all over the world to read.

3. The Alchemist: A Fable About Following Your Dream- Paulo Coelho

4. The Truth about Leadership: The No-fads, Heart-of-the-Matter Facts You Need to Know- James M. Kouzes and Barry Z. Posner

5. Good to Great: Why Some Companies Make the Leap and Others Don’t- Jim Collins

8. The Innovator's Dilemma: When New Technologies Cause Great Firms to Fail (Management of Innovation and Change)- Clayton Christensen

9. Tribes: We Need You to Lead Us- Seth Godin

10. Drive: The Surprising Truth About What Motivates Us- Daniel H. Pink

11. How to Win Friends and Influence People- Dale Carnegie

14. Daring Greatly: How the Courage to Be Vulnerable Transforms the Way We Live, Love, Parent, and Lead- Brené Brown

15. The War of Art: Break Through the Blocks and Win Your Inner Creative Battles- Steve Pressfield

18. On Becoming a Leader- Warren Bennis

23. Start with Why: How Great Leaders Inspire Everyone to Take Action- Simon Sinek

24. First, Break All the Rules: What the World’s Greatest Managers Do Differently- Marcus Buckingham & Jim Harter

26. Emotional Intelligence: Why It Can Matter More than IQ- Daniel Goleman

29. The Effective Executive: The Definitive Guide to Getting the Right Things Done- Peter Drucker

31. The First 90 Days: Proven Strategies for Getting Up to Speed Faster and Smarter- Michael Watkins

36. The Five Dysfunctions of a Team: A Leadership Fable- Patrick Lencioni

37. Learning to Lead: The Journey to Leading Yourself, Leading Others, and Leading an Organization- Ron Williams with Karl Weber

38. Developing the Leader Within You 2.0- John C. Maxwell

40. Humble Leadership: The Power of Relationships, Openness, and Trust- Edgar H. Schein and Peter A. Schein

42. Excellence Wins: A No-Nonsense Guide to Becoming the Best in a World of Compromise- Horst Schulze & Dean Merrill

44. Leadership is an Art- Max DePree

47. Beyond the Wall of Resistance (Revised Edition): Why 70% of All Changes Still Fail-- And What You Can Do About It- Rick Maurer

48. The 11 Laws of Likability: Relationship Networking . . . Because People Do Business with People They Like- Michelle Tillis Lederman

49. Conscious Business: How to Build Value through Values- Fred Kofman

50. Dealing with Darwin: How Great Companies Innovate at Every Phase of Their Evolution- Geoffrey A. Moore

52. Moneyball: The Art of Winning an Unfair Game- Michael Lewis

53. Leaders Eat Last: Why Some Teams Pull Together and Others Don't- Simon Sinek

54. Lean In: Women, Work, and the Will to Lead- Sheryl Sandberg

57. Minority Leader: How to Build Your Future and Make Real Change- Stacey Abrahms

58. The Hard Thing About Hard Things: Building a Business When There Are No Easy Answers- Ben Horowitz

62. How to Lead: Wisdom from the World’s Greatest CEOs, Founders, and Game Changers- David M. Rubenstein

63. Legacy: What the all blacks can teach us about the business of life- James Kerr

64. The Making of a Manager: What to Do When Everyone Looks to You- Julie Zhuo

67. The Four Fixations of a Brilliant Leader- Alan J. Sears

68. Biased: Uncovering the Hidden Prejudice That Shapes What We See, Think, and Do- Jennifer L. Eberhardt

69. The Introverted Leader: Building on Your Quiet Strength- Jennifer B. Kahnweiler

71. How to Own the Room: Women and the Art of Brilliant Speaking- Viv Groskop

72. If I Could Tell You Just One Thing- Richard Reed

75. Now It Can Be Told: The Story Of The Manhattan Project- Leslie R. Groves

77. More Than Enough: Claiming Space for Who You Are (No Matter What They Say)- Elaine Welteroth

78. The Ride of a Lifetime: Lessons Learned from 15 Years as CEO of the Walt Disney Company- Robert Iger

80. We Should All Be Feminists- Chimamanda Ngozi Adichie

81. How the Mighty Fall: And Why Some Companies Never Give In- Jim Collins

82. Predictable Success: Getting Your Organization on the Growth Track--and Keeping It There- Les McKeown

Africason is a die-hard believer in Africa.
Twitter: @African_School
Facebook.com/AfricanSchool
Support me
I am raising money to build a model school that would produce students who will outperform those from our current system of education in Africa, in science and scientific thought. I bet you that I'll change education in Africa if I have the resources. Donate here