Top 6 African Countries That Are Hostile To Black People

Top 6 African Countries That Are Hostile Toward Black People 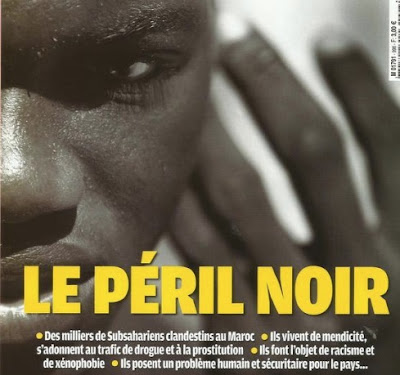 Morocco
Travelers to Morocco often describe the stunning landscape with mountains, deserts, valleys, and uninterrupted miles of beaches on the Mediterranean and Atlantic coasts. What’s often overlooked is the way Black people are treated in the country.
In a 2010 Afrik-news.com article, author Smahane Bouyahia reports that Blacks in Morocco — natives, immigrants from elsewhere in Africa, and African-Americans — are often targets of racial discrimination.
“In Morocco, and north Africa, there is a serious problem of racism towards Black people. Called ‘Black Africans,’ they are considered descendants of slaves and labeled ‘hartani’—literally, ‘second-rate free men’—or even worse, ‘aâzi’—which translates to ‘bloody Negro.’ Blacks in Morocco, be they students, migrants from the south of the Sahara or others, are constant victims of discrimination,” Bouyahia wrote.
In 2012, French cable news channel, France 24, reported that a Moroccan newsweekly magazine published an article about sub-Saharan Africans coming into the country. The title of the article was “Le péril noir,”  the black peril, or the black menace.
France 24 also displayed the cover page of another Moroccan magazine, written in Arabic, with an image of what appears to be African immigrants standing in front of a building under the title caption: “The black crickets invading Morocco’s north.”
One student highlighted in Bouyahia’s article described his experience studying in Morocco:
“Often, when I’m just walking down the street, people will call me a “dirty Black man” or call me a slave. Young Moroccans have physically assaulted me on several occasions, for no reason, and passers-by who saw this didn’t lift a finger to help me. All my friends are Black and they have all had similar experiences. Even the girls get insulted in the street. To avoid getting hurt, I now try to ignore the insults. But if someone starts to hit me, what can I do? I have to defend myself.” Libya
Libyan leader Moammar Gadhafi had for many years allowed guest workers to travel from all over Africa to find work in Libya.  However, during the 2011 Libyan civil war, rumors began to surface that sub-Saharan mercenaries paid for by Gadhafi were being used to attack  demonstrators in Libya’s towns and cities.
Although several NGOs found no evidence of  such mercenaries, the rumors were followed by gruesome attacks on the country’s many Black African migrant workers. But animosity toward Black immigrants did not begin with the civil war.
Amnesty International researcher Diana Eltahawy said the rebels taking control of Libya tapped into “existing xenophobia.”
In his 2011 Thinkafricapress.com article, Beyond Mercenaries: Racism In North Africa, Tom Little writes:
“In spite of evidence showing widespread violence against migrant workers trying to escape the turmoil, the foreign press suggested that these attacks were regrettable but to be expected given the atrocities committed by [Gadhafi’s] mercenaries. Few, however, picked up on the fact that these attacks are symptomatic of a racial prejudice that is deeply rooted and widely spread throughout North Africa and the wider Arab world.” 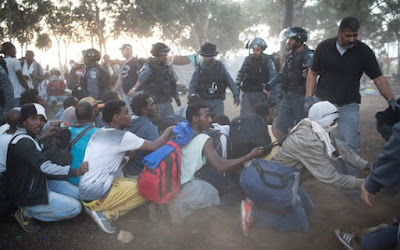 Egypt
While traveling in Egypt, its good to note that according to an article by Al Jazeera, Black Egyptians and immigrants from sub-Saharan Africa face daily incidents of racism and prejudice.
Reuters reporter Cynthia Johnston reports in her article, Egypt’s African Migrants Dodge Rocks, Fight Racism, that migrant workers from Burkina Faso, Ghana, Sudan, Cameroon, Niger and Chad have suffered daily abuse at the hands of Egyptian Arabs.  Some have been stoned, shouted at, spat on and even stabbed at as they go about their business in the streets, according to her article.
Several media outlets reported a December 2005 incident, where Egyptian riot police brutally attacked a camp of Sudanese refugees in Cairo who were protesting their treatment. In front of television cameras, at least 23 refugees were killed, and hundreds of others were injured, arrested, imprisoned or deported. There was little public protest.
Black Africans report verbal harassment and negative language, such as being called “oonga boonga” orsamara [black], as well as physical attacks in the streets by the public and even by Egyptian law enforcement officials, reports Michael Curtis, writer for Gatestone Institute, a New York international policy think tank.
Blacks are being stopped for random identity checks on the basis of skin color, and have faced arbitrary roundups, he continued.
In a 2011 article on Root.com, the author reports that southern Sudanese women are routinely targets of verbal public abuse. Carloads of Arab men drive by them, hanging out of windows, shouting catcalls, or making loud demands for sexual favors.
Although Nubians are among the indigenous inhabitants of what is now considered modern Egypt, they are not spared discrimination based on skin color.
Nada Zeitoun, a Nubian filmmaker from the upper Egyptian city of Aswan, was denied service at a pharmacy in central Cairo in 2013 because the pharmacist said he “didn’t accept money from Black hands.” 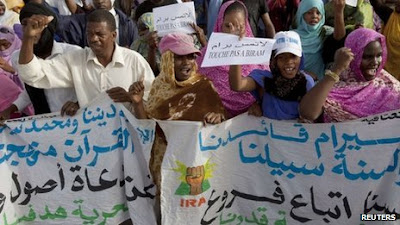 Mauritania
Since it gained its independence from France in 1960, Mauritania has struggled with ethnic tension between the Afro-Mauritanians and so-called Arab-Mauritanians.
In 1989, thousands of Black Mauritanians were forced to flee to neighboring Senegal and Mali. They were reportedly forcibly deported by the Mauritanian military, according to an interview given to NPR by Souleymane Sagna, an aid worker in the country.
“The situation of those Black Mauritania was quite particular, in that very often people are moving during a conflict, but in the case of the Negro Mauritanians, there have been many militarily deported through military trucks to Senegal and Mali,” she said.
Today, although Mauritania officially abolished slavery for a third time in 2007, making it punishable by up to ten years in prison, the practice still exists.
In the northwestern African country,  Arab Muslims—called the Bidanes, still hold Haratine (enslaved Africans) as property. An estimated 90,000 Mauritanians remain essentially enslaved, as previously reported by Atlanta Blackstar. 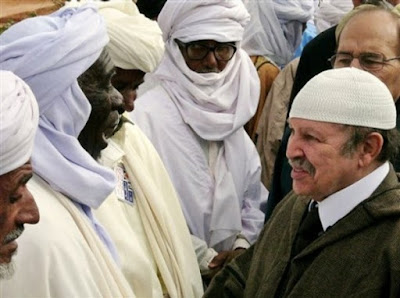 Algeria
Many migrants from sub-Saharan Africa moved to Libya to find jobs, but because of that country’s current crisis, more of them are making homes in other countries, such as Algeria.
In Algeria’s city of Boufarik, hundreds of migrants live in area known by locals as “the African camp” or “the camp of the Blacks.”
With the increase of sub-Saharan migrants in the country, Algerians are becoming openly racist, accusing them of being dirty, jobless and spreading diseases. Local media outlets are also playing an important role in the increase of racism against the migrants.
The daily Al-Fajr (The Dawn) published an article declaring, “Thousands of Africans invading the streets of the capital,” and blaming them for “spreading epidemics and other social ills, such as trafficking in counterfeit money.” 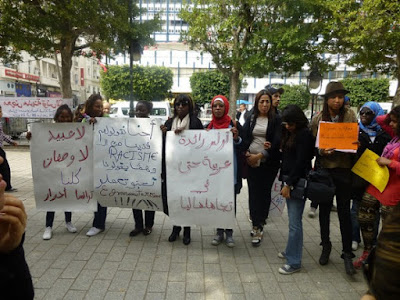 Tunisia
Tunisia, like its other Arabic neighbors in North Africa, has a significant Black population as well as migrant workers from sub-Saharan Africa, although their exact numbers are unknown. They are noticeably absent in up-and-coming neighborhoods, and are largely found living in cheap, overcrowded structures in run-down areas such as La Goulette.
In 2004,  Tunisian journalist Affet Mosbah wrote for Jeune Afrique, describing the difficulties of being Black and Tunisian.  She talked of the widespread custom of calling Black Arabs “oussif” or “abid,” Arabic terms that refer back to Black slaves common in the Middle East until the beginning of the 20th century.
Mosbah explained that this custom is so embedded in the culture that Tunisians call their Black friends by these offensive names, insensitive to how offensive they are.
Source: Atlanta black Star
Africason
Africason is a die-hard believer in Africa.
Twitter: @African_School
Facebook.com/AfricanSchool